Modern metallic high-performance materials are characterized by precisely matched alloy components. In order to increase the proportion of recycled content of these materials, the alloy composition of the scrap used must first be determined. In 2014, the idea matured of transferring the laser-induced breakdown spectroscopy method, which has been used for decades in the laboratory and on Mars, into a measuring technique for analyzing large flows of recyclable materials. Back then our goal already was the direct recycling of valuable materials. At the end of 2014, Clean-Lasersysteme GmbH and two other project partners started the project "Development and testing of a laboratory device for the cooperation of laser ablation and laser-induced breakdown spectroscopy on metallic secondary raw materials", which was funded by the German Federal Environmental Foundation (Deutsche Bundesstiftung Umwelt - DBU).After its successful completion, the follow-up project "Testing of a scanable prototype for the collaboration of laser ablation and laser-induced breakdown spectroscopy on metallic secondary raw materials under near-industrial conditions" was approved and also successfully completed at the end of 2017. 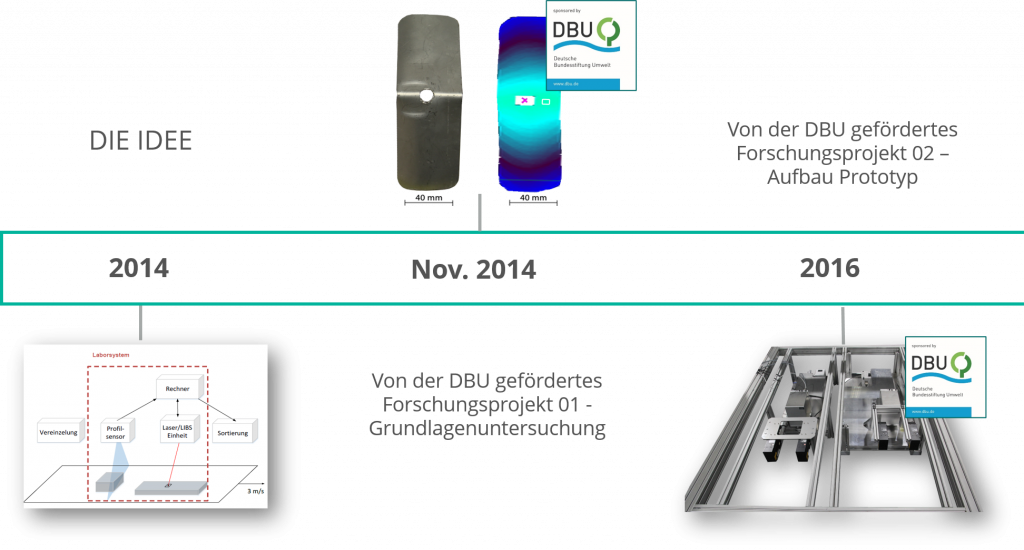 In order to bring the technology to market maturity, the managing partners of Clean-Lasersysteme GmbH together with Philipp Soest (managing director of cleansort GmbH) founded the company cleansort GmbH in Rösrath in 2018. In the following years, the plant technology was further developed and tested in three lighthouse projects. This test phase enabled us, together with the industry, to transform the former idea into a product.

We would like to thank the German Federal Environmental Foundation (Deutsche Bundesstiftung Umwelt - DBU) for their sustained support during the basic research and the founding phase of cleansort GmbH.